Everything you need to know about the sidechain that works for you.

Bitcoin is limited in its scalability.

As Bitcoin’s popularity explodes, so does the strain on its network.

The decentralized nature of Bitcoin means that every transaction must be verified by all nodes in the network, making it difficult to scale. Transactions take a long time to process and the network can only handle a certain number of transactions per second. This has led to slow confirmation times.

Several solutions have been proposed, including off-chain transactions and second-layer networks, but many of them require some trust in a third party.

In this article, we’ll take a look at using Bitcoin on Peerplays blockchain (Peerplays Sidechain for Bitcoin) and what it can mean for you.

We created a sidechain for Peerplays that would provide added benefits of using Bitcoin. The validation process starts with depositing your Bitcoin. It goes through a series of validations. It then connects directly into the blockchain network via an operating node (SON). This SON contains important information within its consensus protocol; they’re what enables cross-chain communication between blockchains in order to make sidechains work.

We started off with Bitcoin and will expand to other blockchains like Ethereum and HIVE. It’s possible to scale the blockchain without sacrificing security or decentralization by leveraging our Gamified Proof of Stake consensus mechanism.

Apart from the Bitcoin Sidechain, Sidechains for other networks like Ethereum are coming in the future. People aren’t limited to using PPY (Peerplays native token) or any other token under Peerplays ecosystem. This comes back to one of Peerplays core values: offering more freedom and choices.

You’ll be able to use Bitcoin for all Peerplays related products like Peerplays RNG, Peerplays NFT Marketplace, BookiePro, Easy5050, and much more.

The Bitcoin network processes 4.6 transactions per second, takes 10-20 minutes to send a payment, and has a block time of 10 minutes. Block time means how long it takes to create a new block in the chain.

The process of depositing Bitcoin into Peerplays takes as long as the Bitcoin Network, but after some confirmations, it’s in Peerplays Sidechain. And with an average of 3-second block time for Peerplays, you can enjoy instantaneous speed.

You can use your super fast bitcoin on dApps. And it’s as secure as it gets.

When you deposit Bitcoin into Peerplays Sidechain, it converts to pBTC.

pBTC is a Peerplays Blockchain asset. It represents your bitcoin balance on Peerplays sidechain. Having a pBTC means 1 BTC. pBTC can never be issued without a BTC deposit.

When a transfer of BTC to pBTC happens, SONs will process it. They pick up the information needed for handling deposits and create an amount on Peerplays’ network that corresponds to the predefined asset. 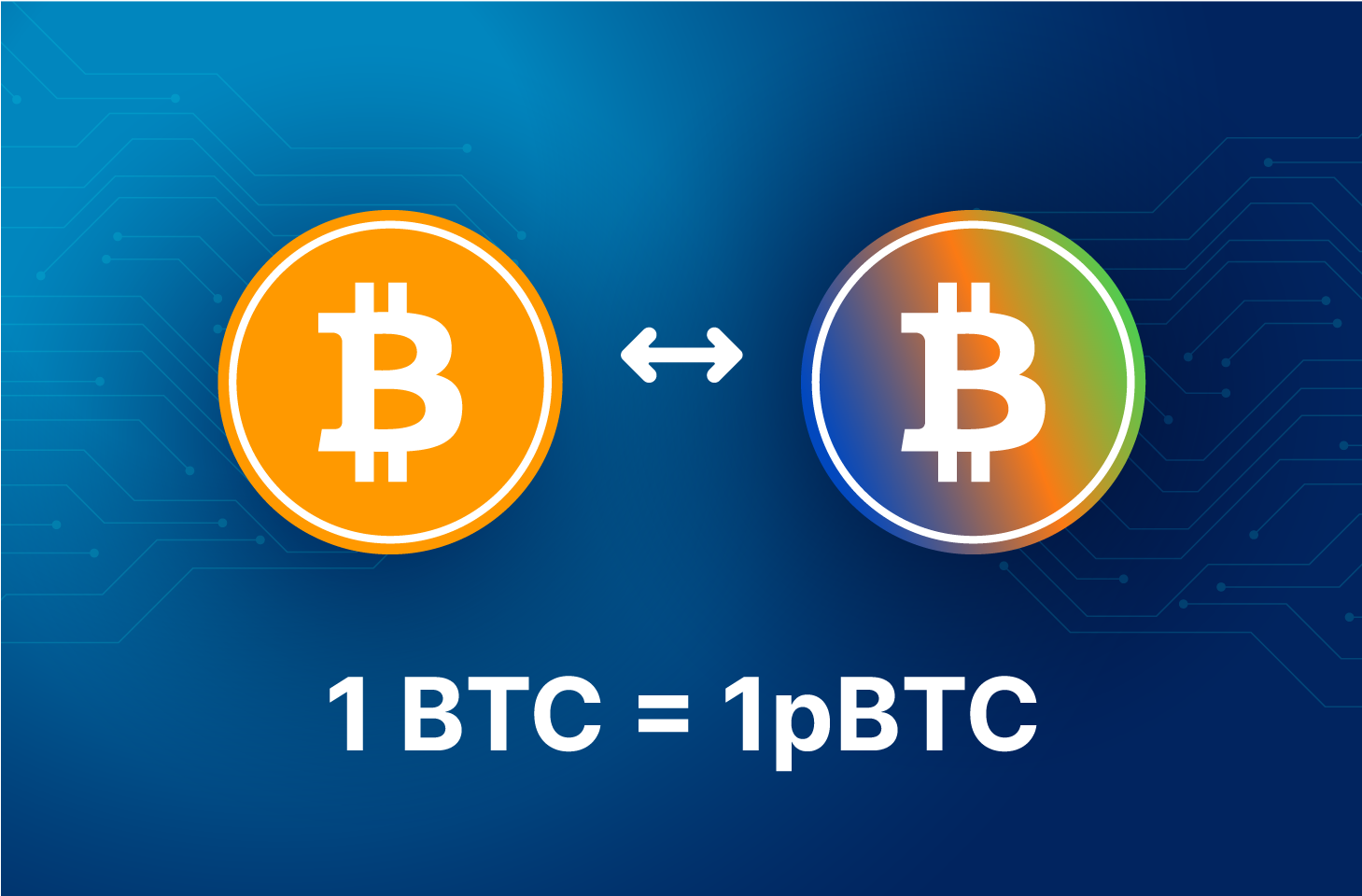 Once a deposit has been identified, pBTC tokens are issued. So first the information about it is sent out and checked by all active SONs in order to make sure that there’s no discrepancy between what was submitted and how each of them would have generated their own data for this transfer based on when transactions were made available. If the data doesn’t match, the deposit gets canceled. If it does match, the deposit information is confirmed and proceeds.

If there are more than 5 active SONs, the process continues. If not, the transaction waits for more active SONs to join.

SONs do parallel processing of transactions. Each SON signs it and adds your transaction to a list of signed transactions. An ‘Operation Evaluater’ checks the signatures to ensure that the last signature needed to complete the transaction is there. If not, this step will repeat until signed. Once signed, the transaction will be marked as complete.

After being marked as complete, it will be converted into an easily readable format and sent over to the Bitcoin network. Finally, you’ll receive the pBTC amount. 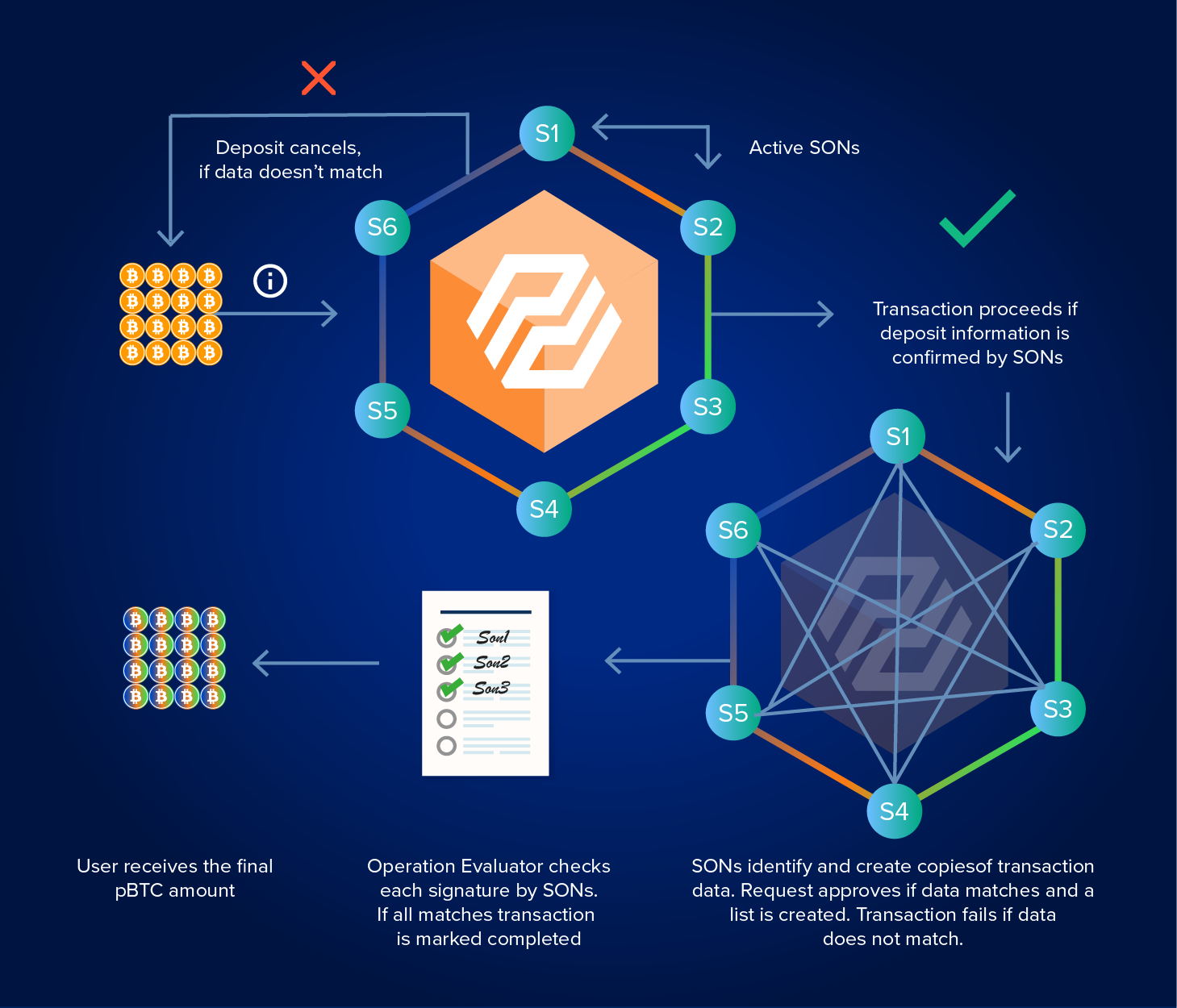 The withdrawal process is quite similar to the depositing process, except for slight differences.

When you initiate a Bitcoin withdrawal, your request will be picked up by a SON and then checked by all active SONs to compare the information with the information present in other SONs. If the data doesn’t match, the transaction will get canceled. If it does match, the withdrawal process will proceed.

Similar to depositing, there must also be over 5 active SONs. If there aren’t, the transaction will pause and resume once there are.

So the active SONS create copies of the transaction data and then compare it between the SONs to ensure the withdrawal request is correct. If the data doesn’t match, the withdrawal request won’t be approved and gets canceled. If the data does match, then a list of SONs is expected to create and publish the transaction. Just like the deposit process.

Just like depositing, SONs will do parallel processing, sign the transaction, and add it to a list of signed transactions. The Operation Evaluator will determine its status and make sure it’s been signed by the last signature required. If not, the process will repeat until signed.

Once signed, the transaction will be complete, converted into a readable format, and sent to the Bitcoin network. Finally, receive your BTC.

You can think of Peerplays Sidechain as highways with multiple lanes: there’s no point of congestion because different cars can go in different directions all around it. SONs help transactions to be processed off the main blockchain network and then settle on it. This means more transactions are handled at once without slowing down the network significantly.

With Peerplays Sidechain, you can use Bitcoin with its full potential and enjoy instantaneous speed.

Follow our News and Articles, so you will not miss out the latest news about SONs.

Blockchain is Changing How We Use Data

6 Benefits of Social Tokens in Sports

5 Key Benefits of Blockchain in Manufacturing